Doctor Strange in the Multiverse of Madness earned $27.2 million across its first batch of overseas markets on Wednesday. The latest installment of the Marvel Cinematic Universe opened in 20 material markets, including South Korea ($5.9M), Japan ($3.8M), France ($3M), Italy ($2.2M), and Germany ($1.8M). The title is currently tracking 4% behind the opening day of Spider-Man: No Way Home in equivalent markets.

Preview figures from several key global markets are not included in Disney’s initial tally for the film. Doctor Strange in the Multiverse of Madness was the top film across the Latin America region on Wednesday, despite only playing select showtimes as part of its preview playdate. The film earned a total of $10.3 million from previews across Latin America, a figure not included in the $27.2 million noted under Wednesday’s official opening day grosses. Top preview markets in Latin America include Mexico ($3.5M) and Brazil ($2.7M).

Elsewhere in the world, the film grossed $1.9M from previews in Australia—the highest ever pre-release figure ever recorded in the market. Preview figures are traditionally combined with opening day grosses. Doctor Strange and the Multiverse of Madness opens Thursday in the UK, Australia, Brazil, and Mexico as well as Croatia, Czech Rep, Greece, Hungary, Israel, Portugal, UAE, Indonesia, New Zealand, Argentina, and the rest of Latin America.

The Doctor Strange standalone sequel recorded the second-highest opening day of the pandemic era in France. The Boxoffice Company’s Boxoffice Live dashboard, which tracks live ticket sales across the French market, reports 335k admissions for the film over its first day alone. Over half the ticket sales in France came in for showtimes scheduled after 7pm, with the highest-demand showtime being 10pm screenings. Based on the opening day alone, Doctor Strange in the Multiverse of Madness could reach a total of 5 million admissions in France through the end of its theatrical run. Only Spider-Man: No Way Home has crossed 5 million admissions in France since cinemas re-opened due to the pandemic. 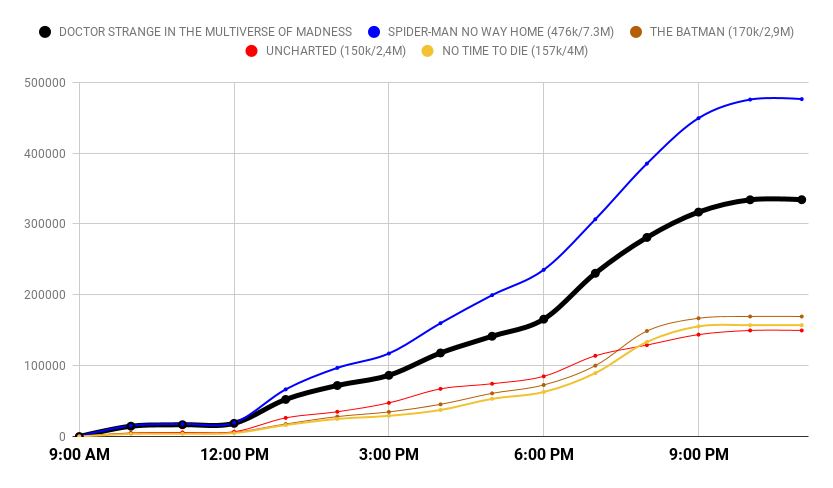 With additional reporting from Romeo Duchene